The “Decade of Commemorations” marks the 100th anniversary of events which shaped and influenced British & Irish History such as The Ulster Covenant, First World War, Easter Rising, Battle of the Somme and Act of Partition

In 2013, as part of a Peace III funded programme, I arranged a number of talks with expert historians as well as a memorabilia roadshow where local people could take along their artefacts and have historical provide some more detail on the the significance of their items.

It was a wonderful opportunity to capture all of these events on a DVD and I was delighted when Dr Éamon Phoenix agreed to tie it all together by filming some of the key historical sites related to the Decade of Commemorations around the Dungannon area.

Thanks to Éamon and his expertise in front of the camera we spent a wonderful day filming key locations around Dungannon and County Tyrone. 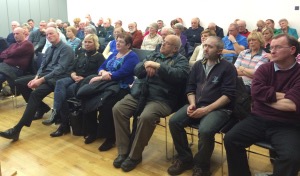 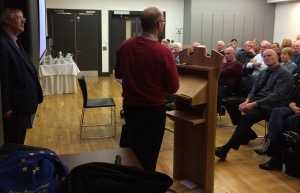 Last night Éamon presented a talk on Stronger in Diversity linking the Decade to Dungannon in Ranfurly House and used clips from the DVD to highlight some of the local stores and links to key events in history.

The DVD has been made available free to local groups and organisations and a copy is available at Ranfurly House.

Castle Hill: Remains of towers that belonged to Knox Hannyngton House on the site of the Castle of Hugh O’Neill
Castlecaufield: Birthplace of Joseph Johnston author of ‘Civil war in Ulster’ 1913, Protestant Home Ruler
Northland Row: Home to Thomas Clarke, Irish revolutionary leader in 1916 Easter Rising
St Patrick’s Hall, Coalisland: The rendezvous point for the Irish Volunteers, the only Ulster action in the 1916 Easter rising
Dungannon War Memorial: Commemorating the Cumberland Brothers and their engagement in the Battle of the Somme
War memorial, New Mills: Pt Robert Morrow, awarded the VC for his actions on the 12 April 1915 near Missines, Belgium
The Market Square: Scene of the stoning of Countess Markievicz.
Killymoon Castle, Cookstown: immobilisation of 850 UVF in 1914

The DVD also includes artefacts brought by the public to the ‘Memorabilia Roadshow’ held in Dungannon Library in 2013 where Dr Éamon Phoenix, Dr Johnston McMaster and Dr Gavin Hughes helped identify and date the items.

Memorabilia includes an Orange Order poster from 1886 declaring ‘Nay’ No Surrender; A group photographs from the 2nd Btn RIF taken in India; a post card from a Dungannon actress who was entertaining the troops in France; a 1915 War Service brooch; WWI medals and scroll; UVF Gunrunning instructions for drivers and old song books for soldiers.